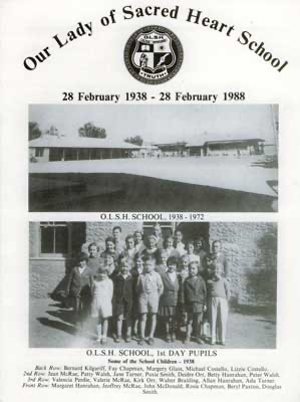 The hopes and aspirations of two French priests during the nineteenth century in Southern France seem a world apart from the modern day needs of young people in Australia, and yet their vision, faith, and hard work, are the basis of our Catholic educational system in Alice Springs.

Saint Marcellin Champagnat, Founder of the Marist Brothers in 1817, was part of a group of priests who had a dream for a Society of Mary, encompassing Priests, Brothers, Sisters and lay people. Different Marist Orders were eventually founded, with similar ideals, but for a variety of reasons, the Priests, Brothers and Sisters have been administered quite separately, from their earliest days.

In 1874, Fr. Jules Chevalier founded a group of Sisters, the Daughters of Our Lady of the Sacred Heart (FDNSC), to spread devotion to Mary. These Sisters have a mission in the Church to make known the love of God which is revealed in the Heart of Jesus, in union with his mother, Mary.

With missionary pursuits and education being the main focus of these French Religious Orders, they soon ventured to Oceania and started their important work in the new colony, Australia.

The Missionaries of the Sacred Heart and the Daughters of Our Lady of the Sacred Heart have provided the backbone of Catholic parishes and schools in the Northern Territory, over the past century, while the Marist Brothers came to the Diocese of Darwin in the mid 1970's.

In 1854, Father Jules Chevalier formed the Missionaries of the Sacred Heart (MSC); only thirty seven years after Father Marcellin Champagnat had brought the first Marist Brothers together. Both priests had a great love for Mary, the Mother of God, and their devotion to this very special lady, forms the heart of the spirituality of these religious orders.

The Parish has strongly supported Catholic education throughout the intervening years. The Primary school eventually expanded to two sites in 1992, with the second campus at Traeger Park. Following discussions in the parish during 1980, the Marist Brothers were invited to administer the junior co-educational secondary school, Catholic High School, which opened in 1983. In 1994 the High School took on senior classes (Years 11 and 12).

At the beginning of 1995 Bishop Ted Collins announced that OLSH Primary School and Catholic High School would combine to become one College by the beginning of the 1997 school year. He noted that the decision offers the opportunity to maximize Catholic resources and to better prepare the students for the future. Ironically, as fate would have it, the first classes of the secondary school, back in 1983, were actually held at the Parish Centre, alongside the Bath Street Campus.

The visions of Chevalier and Champagnat are now harmoniously linked at OLSH Catholic College. The College has moved on to an exciting future, blessed by a rich past steeped in the Marial tradition, moulded in that unique Central Australian way. May Our Lady of the Sacred Heart Catholic College continue to honour Mary in a special way and provide a special learning environment for the youth of Alice Springs.

Our College crest is rich in symbol and tradition. The shield is an image used by many cultures as a symbol of protection. This shield unifies and protects our community of Our Lady of the Sacred Heart Catholic College. The decoration surrounding the shield incorporates elements commonly found in the marks made by desert Aborigines. This acknowledges the Indigenous culture of our land.

The scrolls hold the name and location of our College. This is our identity - it is who we are and where we belong. These scrolls proudly fold around the base of the shield embracing our College motto of Justice, Love and Peace. These three words summarise the message of the kingdom Jesus came to preach.  Without justice, motivated by love, there can be no real peace.

Our Lady of the Sacred Heart Catholic College is steeped in the Marial tradition. The love of Mary, the Mother of God, forms the heart of the spirituality of the Marist Brothers and the Daughters of Our Lady of the Sacred Heart. The Cross and the “M” represents the Gospel story of Mary standing at the foot of the cross.  Both religious orders use this Gospel reading on their feast days. The heart reminds us of our Christian mission in Central Australia to be the heart of Christ to all.

Our Lady of the Sacred Heart Catholic College is a Catholic faith community where the Gospel values of justice, love and peace permeate all that we do.